A species of garnet, Rhodolite resonates with energies of divine love. It brings out the compassion in its wearer.

This stone serves a wide variety of purposes, and it is regarded as an all-purpose crystal. It can benefit one’s spiritual, emotional, and physical existence.

Rhodolite is commonly referred to as the “Rose Stone” because it belongs to the garnet family of gems. It is found in varying shades of rose, pink, and violet.

This stone is a pyrope species of garnet. Rhodolite is believed to have been first defined in North Carolina, but the stone can also be found in Africa, Brazil, and India. 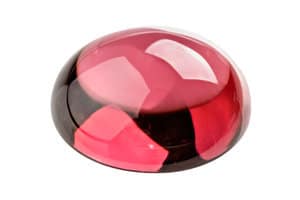 The color of Rhodolite is believed to result from the presence of minerals such as iron, manganese, and chromium. The variance of red hues from stone to stone make each one a unique work of natural art.

A curious fact is that some Rhodolite stones undergo a permanent color change when heated at extremely high temperatures. The resultant color is usually a deep brown.

Rhodolite is commonly used to fashion jewelry due to its beauty. This makes it a good choice for amulets and talismans that are worn or carried for a variety of reasons.

The energy associated with this crystal has a very low vibration. It can be worked with on a regular basis and has many therapeutic applications.

Those who have a high sensitivity to crystals will find that the aura of this stone is muted. It passes along the same aura of calm to its user.

As its nickname suggests, this crystal shares many common associations with the rose. Foremost among these are the qualities of love and compassion.

While Rhodolite can certainly be related to feelings of romantic love, its energy is more reflective of platonic love and goodwill to all of the beings in the universe.

This crystal’s core meaning is that you have self-worth. The awareness of your own self-worth makes you more loving and compassionate to others.

Rhodolite encourages us to embrace the characteristics that make us unique. It moves us to use our special gifts to bring joy and happiness to others.

The stone also vibrates with what it means to be emotionally healthy. It can inspire one to release any negativity that prevents emotional recovery and spiritual growth.

The energy of this crystal is low-key and soothing. It possesses properties that are meant to calm and relax.

Abundance is often mentioned as a property of this stone, but this refers to emotional abundance and happiness. Rhodolite can help to fill one with joy and gratitude.

Inspiration is one of the stone’s properties. It helps to open the mind to new possibilities, and it can enable creative thinking.

Healing is perhaps one of its most common uses. Some physical conditions can be helped with Rhodolite, but the crystal seems to more effectively target emotional disorders.

Fire energy resides within the stone, making it a stone that promotes strength and courage. This, combined with its emotional healing properties, has made it a favorite of those who have suffered abuse.

(Please note: Information on this web site is no substitute for consulting a health care professional. All information we share, including information relating to medical and health conditions, products and treatments, is for informational purposes only.)

Rhodolite is perhaps one of the most effective healing crystals because of how it impacts the body’s energy centers. It focuses on the elimination of emotional illness, and this in turn can promote physical healing.

The crystal is excellent at removing feelings of guilt or shame. It can help one to rediscover their own inherent value.

On a physical level, Rhodolite seems to have the greatest impact on issues involving the heart and lungs. Poor circulation and blood disorders may be improved when frequently working with the crystal.

Spiritual healing is also possible with the crystal. This is especially true when the user wishes to balance the body’s energy centers.

Energy on all levels can be stimulated with Rhodolite. It supplies mental alertness in addition to physical energy.

While the energy of Rhodolite is more suited to the treatment of emotional disorders, it can be used to relieve the symptoms of physical illness. In particular, the crystal is beneficial to the cardiovascular and respiratory systems.

The crystal can also be used to aid circulation. It will relieve poor circulation in the legs, and it may help to relieve joint pain in cold weather.

Matters of digestion can be addressed with the stone, and it helps to relieve heartburn and indigestion. Wearing Rhodolite about the neck can help to relieve a sore throat.

The metabolism may be stimulated when working with this crystal, promoting healthy weight loss. It also increases the libido and may help with sexual dysfunction.

Emotional healing is the main attribute of this garnet stone. It is able to help those who work with it to release painful memories and old hurts.

Those who have intimacy problems will find that the stone offers relief. It can help one to trust and open themselves to love from another.

The mood can be improved, and Rhodolite inspires feelings of euphoria. Many report that simply carrying the stone on a regular basis increases happiness.

This crystal inspires those who use it to reflect on their connection to the divine realms. It encourages the user to seek divine love and self-acceptance above mundane affection.

When one has suffered abuse, this crystal can help to heal those wounds. It has been used by many survivors of both physical and emotional abuse.

Rhodolite has a strong connection to the spiritual realms, and its energy is suffused with divine love. It can be a great help in reconnecting with the divine.

This stone has the ability to help its user create a bond with divine beings such as guardian angels. It deepens one’s understanding of their place in the universe.

The true desires of the heart are laid bare by the crystal. It reveals the source of one’s true passion.

When working with Rhodolite, an individual may be inspired to increase the time spent in prayer and meditation. It can also be an aid to astral travel when kept close during the sleeping hours.

The uses for Rhodolite are varied. It can be worn as an amulet, carried as a talisman, or held as a point of focus during meditation.

Garnet has long been worn to protect against poisonous substances. The same can be said for the Rhodolite variety of garnet.

The stone is considered to be a building block when working with crystals. It supplies the foundation needed in order to create harmony with the universe.

The Greeks believed that these stones were useful in preserving romantic relationships. It is also believed that famous conquerors wore garnets on pieces of jewelry.

Because of their red color, garnets have also been used throughout history to stem the flow of blood. They were sometimes placed directly on a wound to promote clotting.

It is often said that creative individuals can use the crystal to receive inspiration. It makes a great addition to the studio of any artist.

Likewise, some artists such as writers like to keep a pen that is adorned with these stones. It is believed that the crystal will open up a connection to the artist’s muse.

For spiritual growth, one should spend time each day attuning with the energy of the stone. Rhodolite will reveal the areas of life in which a person needs to improve.

To attract love, wear Rhodolite in a setting around the neck. The stone will project to others that you are confident and well-grounded.

As your confidence grows and manifests, an appropriate romantic partner may be drawn to you. The crystal enhances your personal magnetism.

The stone can also be used to encourage fidelity. It works to unite couples that are struggling in their relationship.

By far, the most important use of Rhodolite is as an emotional comforter. Simply feeling the pulse of its energy in the palm of one’s hand can bring about inner peace.

Some recommend this stone for individuals who suffer from PTSD, anxiety, or other emotional problems. It has been carried by soldiers returning home from war.

The calming nature of Rhodolite makes it a wonderful aid to meditation. Individuals have used it in many different ways to assist in attaining an altered state of consciousness.

One of the most popular methods of meditation use is to place the stone on an altar that is used during periods of contemplation. It will fill the room with vibrations of peace and love.

Another method is to hold the stone in the hands while meditating. One should focus on letting the stone absorb all negative emotions and energies.

Alternately, one can focus on the peaceful energy of the crystal and work to draw this into the body. Envision the energy flowing from the top of the head to the soles of the feet as it opens the chakras.

Because the vibrations of Rhodolite are low, the stone can be used frequently during meditation. It is always best, however, to spend a few moments grounding at the end of one’s work.

Rhodolite serves as both a natural and a traditional birthstone. Those who are born during certain periods may have more success when using the crystal.

Garnet has long been the traditional birthstone for those born in the month of January. As a variety of garnet, Rhodolite is also attuned to individuals born in this month.

Rhodolite, when it has a red hue, also serves as a natural birthstone for those born between October 22-November 20. The qualities associated with this birthstone are passion and courage.

Some examples of Rhodolite are more amethyst in their coloration. These stones are naturally attuned to those born between November 21 and December 20.

The time of the Winter Solstice is a wonderful time to work with the crystal. It represents the emergence of new life, and the thawing of the emotions.

Placing a Rhodolite in the light of the moon during seasonal changes is thought to increase its universal energy.

The zodiac sign of Aquarius rules this crystal. Those born under this sign are creative, and Rhodolite inspires the creative soul.

Truth is important to Aquarian individuals. Rhodolite can help one get to the truth of matters, and it encourages honest appraisal of the soul.

Aquarius is the zodiac sign belonging to the period of January 20-February 18. It is generally regarded as a sign of great promise and enlightenment.

Rhodolite corresponds to three of the energy centers in the human body. These are the base, heart, and crown chakras.

Because it is related to three important chakras, Rhodolite has an excellent ability to bring the physical and spiritual bodies into perfect balance.

Kundalini energy is believed to be the life force of the body and spirit. The proper flow of this energy is encouraged when working with Rhodolite.

The root chakra is located at the base of the spine. It is the seat of physical energy and emotional balance.

The heart chakra is located in the area of the breastbone. It regulates our perception of the world and how we regard life’s experiences as good or bad.

The crown chakra rests at the top of the head and is responsible for our intellectual responses. It is the seat of logic and reason.

Rhodolite can open all of these energy centers to create physical, emotional, and spiritual well-being. It corrects any inconsistencies between our physical and spiritual selves.

Many women find comfort in Rhodolite during pregnancy because it opens the heart center to send loving vibrations to the infant in the womb.

Working with Rhodolite on a regular basis is recommended when trying to open the chakras. A routine will help to keep the energy centers from becoming blocked.