Bloodstone is a type of jasper, also known as heliotrope. Jasper is a variety of quartz that is often polished to a fine shine.

The stone is a dark green color with red spots from iron oxide (also known as hematite) or red jasper, giving the stone its name. It is prized for its beauty as well as for its mystical properties.

Since the stone is created by inclusions of different materials, every bloodstone has a unique and beautiful appearance.

In the Christian tradition, bloodstone is said to have been created when the blood of Christ fell upon the green earth at his Crucifixion. The falling blood mixed with the earth below and created the bloodstone.

In pre-Christian times, the stone was known as heliotrope, the “sun stone.” The name is derived from the Greek helios for “sun” and the word trepein or “to attract.” 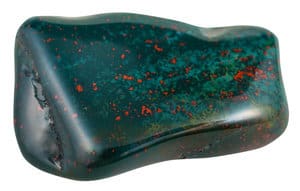 The stone was said to attract the sun each day as it traveled across the sky. It was strongly associated with sunset, and it was said to give a blood-red color to the reflection of the sun.

According to the Greeks, the stone contained the power of life, since it represented both the blood in the body and green, growing things. Another legend associated with the bloodstone is that magicians used it to gain invisibility.

The bloodstone has long been renowned for its ability to remove barriers and cause harmony to prevail.

In magic, the bloodstone enables the spell caster to control negative spirits. Ancient Egyptians believed that the stone magically conferred credibility to the wearer and that everyone would believe his or her words.

The stone was purported to influence the weather, and it was used by many ancient sages to bring the winds. Healers also used it to wash away a person’s troubles by encouraging the wind and rain to come.

Bloodstone honors the Roman goddess Bona Dea, a fertility goddess who was associated with healing. She guides and guards women as they move through all phases of their lives.

Warriors, to ensure that they would win their battles, have used the bloodstone throughout history. These battles may take physical form or they may be battles of the mind and wits, as in legal cases.

In current times, the stone has come to symbolize sacrifice. Christians who wish to reflect upon the tenets of their religion wear it as a reminder of Christ.

Along with sacrifice, the stone also represents the idea that life is always associated with pain. The stone also means that people should take ownership of their struggles and realize that strife makes them stronger.

Bloodstone is a cryptocrystalline form of the mineral quartz. It has a Mohs hardness of 7 and a trigonal crystal structure.

It has a vitreous luster and a specific gravity of 2.61. It is comprised of silicon dioxide.

The green and red colors can vary widely depending on the composition of the stone. The red hematite making the “blood” is distributed unevenly throughout the stone, creating an astounding variety of beautiful patterns.

Bloodstone differs from chalcedony in that it includes chlorite or amphibole minerals, creating the green shade. It can also have yellow spots or bluish-gray spots that only increase the gem’s beauty.

Bloodstone is primarily found in India. It has also been mined in Australia, Brazil, Azerbaijan, China, Scotland, and the United States.

While it is a common form of jasper, it is much prized for its beauty as well as for its healing and mystical properties.

(Please note: Information on this web site is no substitute for consulting a health care professional. All information we share, including information relating to medical and health conditions, products and treatments, is for informational purposes only.)

Bloodstone has been known throughout history for its healing properties. It has been worn as a protective stone since ancient times, and it can help with numerous ailments of the body, mind, and spirit.

Bloodstone is renowned for its power to heal wounds. Going back to ancient Greece, Rome, and Mesopotamia, it was worn as a protection against injury and disease.

Bloodstone is especially connected to the circulatory system, where it can help to staunch bleeding. It has also been said to cleanse the blood and detoxify the body.

Even today, bloodstone is dipped in cold water and applied to an area that is bleeding. The energy of the stone works on the blood and causes it to coagulate.

Bloodstone water, made by soaking the stone in distilled water, can help with hemorrhoids and varicose veins. It can also lessen the itching of mosquito bites.

Bloodstone has a deep connection with women’s health and helps with menstrual pain. It also helps a woman gain strength during childbirth.

It is known as a “mother goddess” stone, extending its power past childbirth and into a woman’s life with her baby. Mothers who have had difficult births or problems bonding with their babies are encouraged to wear bloodstone.

When powdered, the stone is used against fever. It is also indicated to boost the health of the spleen, bladder, kidneys, and liver.

Bloodstone can also help to lengthen a person’s lifespan. Since it promotes health and energy, its powers can be felt well into old age.

Bloodstone can absorb the pain from an emotional loss or abandonment. It is strongly associated with comfort and calm in difficult times.

Bloodstone teaches that isolation and loneliness are illusions and that all people have a connection to the forces of the divine.

Bloodstone also makes difficult decisions easier and helps to clear up confusion and disordered thought. It helps the wearer decide whether the situation at hand is worth going through the pain it takes to get there.

Bloodstone protects the wearer against bullying, violence, and threats. It creates strength in the wearer and enables him or her to resist negative forces.

The stone can relieve anxiety and depression. It empowers the wearer to make healthy choices and to encourage him or her to take action in all areas of life.

Bloodstone encourages people to live in the present moment and to avoid worrying too much about the future. The earthy energy of the bloodstone is grounding and helps people stay focused on the moment.

At the end of life, bloodstone brings the wearer courage and strength to face their illness and mortality. It helps the wearer to feel calm even in the face of an incurable ailment.

As bloodstone is known as a “Seeker Transformer” crystal, it helps the bearer harmonize with the forces of the universe. It is a stone for those who are interested in opening new pathways of the mind and spirit.

Bloodstone reminds the wearer to be always present in the moment. It increases concentration and adaptability.

Since it lessens anxiety and confusion, it can help people to move forward in their spiritual lives. Bloodstone is also associated with renewal of the mind and spirit.

The stone is renowned for its ability to bring about calm and self-confidence. It brings insight and opens the intuition.

The bloodstone encourages unselfishness. It is associated with a giving, caring force.

Bloodstone opens doors and breaks barriers, and can lead to the removal of obstacles in the seeker’s mind. Obstacles in life can also be surmounted with the aid of a bloodstone.

The stone is associated with wisdom and courage. It is renowned as a “shape-shifting” stone since its colors change depending on the light.

It can help the wearer to travel between spiritual worlds and to come back with new wisdom from unexplored areas of the mind. As a dreaming stone, bloodstone is invaluable.

Bloodstone is a semi-precious gem traditionally worn as a signet ring. It is also carved into small figurines.

In jewelry, cut and polished bloodstone is shaped into beads and cabochons. It is worn as a bracelet, necklace, or ring.

Bloodstone can be worn as a protective amulet. It will ward off negative and hostile energies.

The stone can be used at night to foster dreaming and to connect the user to the spiritual realm. In waking life, it brings renewed creativity and joy.

It makes an excellent luck charm for sports. It promotes healthy competition and keeps the wearer from experiencing negativity.

When you meditate with bloodstone, be sure to take the necessary steps to prepare your environment. Shut off all cell phones and electronics. Make your meditation space comfortable with pillows or a yoga mat.

Clear the energy of the room by using a sage smudge or incense. This will remove any spiritual influences that may conflict with your meditation.

Hold the bloodstone in your hand as you meditate.

Bloodstone increases the power of dreaming and meditation. It calms the mind and spirit.

Bloodstone also promotes a union between the wearer’s spirit and the divine. It reminds the seeker to be one with the present moment.

The divination properties of bloodstone make it useful for meditating on the future. The stone is connected to the power of nature and the weather, bringing a special connection to those who spend the most time outdoors.

When using bloodstone, meditate on the concept that great joy in life may sometimes require great pain beforehand. With bloodstone, your meditation will receive the benefits of strength and adaptability.

Bloodstone can also be used together with amber to intensify its healing and calming properties.

While aquamarine is the modern-day birthstone of March, bloodstone is its traditional birthstone. Bloodstone is associated with renewed life, and March is the beginning of Spring.

People born in March can wear the bloodstone for its beauty or take advantage of its mystical and metaphysical properties.

Bloodstone is associated with Aries, Libra, and Pisces. Fire signs, air signs, and water signs can all find strength and healing in the bloodstone.

The planet Mars is invoked in the bloodstone through its red color and appearance. Aries and Mars work together to bring a person born under this zodiac sign a great deal of strength and self-confidence.

Aries needs the calm of the bloodstone to come down from periods with too much turmoil. Libra needs it to foster decisiveness and clear up confusion.

Pisces needs the emotional fortitude that bloodstone can bring. The positive effects of the bloodstone are not limited to these three signs; people of any Zodiac sign can take advantage of these benefits.

The bloodstone is used for awakening the root chakra. This is the source of the body’s energy.

The root chakra, located at the base of the spine, is where all movement energy arises. When this chakra is not balanced, people may have extremely low energy.

They may have difficulty getting up and moving around, and they may be apathetic and lazy. They may even feel a distance between themselves and reality.

The red energy of the bloodstone clears and rebalances the root chakra, grounding the wearer and providing peace and clarity. It is valuable in times of stress and difficulty when energy may be flagging.

The root chakra also helps to guide people to self-confidence and strength. The protective effects of the bloodstone will shield the wearer against pain and stress.

Bloodstone is also used in the navel chakra, where its emanations have positive effects on the liver, intestines, kidneys, and bladder. With its purifying qualities, this stone provides an important support for the body as it tries to repair itself.

Bloodstone can also have positive effects in the heart chakra. This chakra mediates between the self and the external world.

It brings balance to controlling relationships and moderates extreme emotional responses in difficult situations. The green energy of the bloodstone helps us to connect with ourselves and to deal with the ups and downs of relationships.

This stone will reawaken your mind and body and foster physical and creative activity. Use it wisely by meditating on its unique mystical properties.