Blue Lace Agate is one of the most beautiful varieties of the Agate crystal. Few stones surpass its ability to inspire a calm demeanor.

What is Blue Lace Agate?

Blue Lace Agate is a species of quartz that is one of the many Agate varieties that are found today. This calming banded Chalcedony is known for its sky blue color and swirling patterns.

Most of these crystals are light blue with bands of darker blues and white. On occasion, light brown bands may appear.

You may be reminded of a clear blue sky filled with white clouds when looking at this crystal. This is an apt perception because Blue Lace Agate has a calm energy that evokes a sense of contentment.

The crystal has been called the Stone of the Diplomat. It’s energy vibrations are ones which can bring mutual understanding and cooperation.

Agate has been used for many centuries. It was known to the civilizations of Egypt, Greece, and Rome.

It was not uncommon to find the stone included among the burial treasures of a king or pharaoh.

Neolithic tribes prized varieties of Agate for the crystal’s healing properties. It was also considered a gem, and the stone was often worn for ornamental purposes. 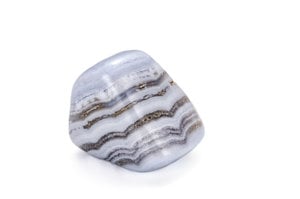 Agate could be a symbol of status in the ancient world. Only the most wealthy individuals could afford the finest and rarest stones.

The polishing and cutting of Agate remain a popular industry today, especially in Germany. Millions of these crystals have made their way into private collections around the world.

Those who collect crystals for energy work are sometimes strongly devoted to Agate varieties. Some collections consist solely of these crystals.

It is believed that an Italian philosopher named Theophrastus discovered the first Agate beside the Achates river between 400 and 300 BC.

This discovery has led to the belief that these stones were meant for those who wish to access the highest levels of human thought.

Like a blue sky on a clear day, Blue Lace Agate symbolizes calm and order. It means that storms are at an end and clear sailing lies ahead.

This stone of support resonates with an energy that lets its user know things are going to work out for the best. It represents a source of encouragement when life presents challenges.

The crystal is a stabilizing influence, helping to bring order from chaos. It reminds us that there are a rhyme and reason to the universal energy.

Blue Lace Agate is a reminder that one should always seek balance and harmony. A life that maintains a balance between the spiritual and physical realms is a life of great fulfillment.

The stone can also mean that one should always remain grateful for the things they have. It helps one to remember where they have been and the struggles they overcame to succeed.

Blue Lace Agate has a very subtle energy field that presents low vibrations. It is a good stone for those who are highly sensitive to the metaphysical properties of crystals.

This crystal is excellent at helping one center and find a place of calm. It prompts one to think before they take action.

The stone also has a protective aspect that makes individuals feel more secure. It can help to restore composure in the midst of crisis.

The tranquil aura of Blue Lace Agate can help to restore a sense of self-control. It is often used to diffuse emotionally-charged situations.

Men will find that the stone can help them to express their feelings in a positive way. It replaces anger and hostility with clear thinking and purpose.

Blue Lace Agate can be worn or carried as a source of healing energy on multiple levels. It encourages frequent use because its energy vibrations are very low.

A tonic can be made by placing the stone in a glass of water overnight. The crystal is removed before drinking the water to promote physical and emotional health.

Because of its tranquil vibrations, the stone works best on health issues that involve the nervous system. It is very useful for treating ailments that combine physical and mental discomfort such as panic attacks.

Daily work with this stone can yield significant results in a short period of time. It can be used in an ongoing fashion to maintain optimum levels of health.

It would be correct to say that the stone is an excellent preventative therapy. Other stones may be more suitable when an immediate physical need arises.

Blue Lace Agate can be worn about the neck to help remedy a sore throat or swollen glands. Some have also found that issues of the thyroid can be resolved with the crystal.

Stomach disorders such as ulcers may be relieved by placing the stone on the abdomen for a short period of time. It works to address both the physical issue and the stress that causes ulceration of the stomach.

The entire digestive system can be encouraged to function more effectively when this crystal is worn each day. Some have found that wearing the stone on a belt or belt buckle is very effective in this regard.

When worn on a necklace near the chest, Blue Lace Agate has a positive impact on the cardiovascular system. It brings both physical and emotional strength to the heart.

A proper fluid balance of the brain and spinal column can also be achieved with the use of the stone. It will increase one’s ability to concentrate while helping to prevent racing thoughts.

Afflictions of the bone such as arthritis are often treated with the stone, and it can also help bones to mend properly after a break.

Place an Agate in the refrigerator to absorb cold before using it on the forehead or eyes. It will drain the tension and can also be used to reduce fever.

Known as a stress-reliever, the stone can help to lower blood pressure. It has also been known to mitigate the effects of a panic attack.

Blue Lace Agate is a crystal especially suited to emotional healing. It starts by spreading feelings of calm throughout the entire body.

This stone will help to ground one in reality. It can change the narrative of the mind and frame experiences in a positive light.

The crystal encourages honest self-analysis. It helps one to identify flaws in character that may be preventing emotional growth.

Blue Lace Agate provides the courage needed to face old fears. It has been used on many occasions to help remove phobias.

Few stones can raise spiritual awareness like Blue Lace Agate. This stone has a particularly strong connection the highest realms of spirit.

The element of air is attuned to this crystal, making it a good choice for soul journeys and astral travel. It can help one vibrate in tandem with the astral realm.

Periods of reflection on one’s spiritual progress are enhanced by the crystal. It encourages one to go deep within to find answers to pressing spiritual questions.

Blue Lace Agate makes a wonderful prayer stone. It can be held during prayer to increase focus and contemplation.

Supportive energy is the hallmark of this crystal. Its primary purpose is to lift one up when they experience moments of self-doubt and stress.

This stone can be given to someone to inspire their loyalty. The crystals make wonderful wedding gifts between spouses because they are a symbol of trust.

Individuals who are tasked with providing care for others can carry this stone to alleviate emotional fatigue. It is especially good at promoting compassion when carried by doctors and nurses.

Those in high-stress occupations will find that the crystal brings calm. Postal workers in particular have good experiences with Blue Lace Agate.

The fear of public speaking will evaporate when the crystal is worn during speaking presentations. It can also help remove many other phobias such as a fear of heights.

Carrying the stone during air travel will help those who experience anxiety during flight.

Teachers find that the crystal improves communication. This use of the crystal can also help business professionals and project managers.

Blue Lace Agate can help to prevent blurting. It encourages one to think before they make rash statements.

Children that suffer from ADHD can benefit from the calming influence of the crystal. It replaces agitation with focused energy.

Many varieties of Agate stones have been worn by new mothers to increase lactation, and these crystals can also help to remove depression that occurs post-pregnancy.

Blue Lace Agate will help those who feel that they are not being heard or understood by family and friends. It gives one the courage to clearly state their feelings.

Placing the stone in the vehicle of a young driver can help to prevent accidents. It will also reduce the temptation to text and drive.

Crystals with a low field of energy are especially suited for meditation. Blue Lace Agate’s calming influence is perfect as a gentle meditation aid.

The unique swirling patterns within the crystal serve as excellent focal points during meditation exercises. They help one to still the flow of thoughts in the mind.

When placed near the meditation space, Blue Lace Agate acts as both a source of protection and tranquility. It helps to rid the working space of any negative energies that disrupt practice.

Some have found that the stone makes it easier for one to attain an altered state of consciousness. It slows down the vibrations of the body to encourage visits to various spirit realms.

A simple meditation practice is to just hold the stone while sitting quietly with the eyes closed. Allow the tensions and stress of the mind and body to be absorbed into the crystal.

Blue Lace Agate does not serve as a traditional birthstone. It is, however, a natural birthstone for those born between February 19 and March 20.

This period which proceeds the spring equinox is a time of new beginnings. The stone can compel one to think upon creative ways to make a fresh start.

The blue color of the stone helps individuals born during this time to project an attitude of confidence. This helps to garner respect from business associates.

Gemini is the zodiac sign most closely aligned with Blue Lace Agate. This sign is represented by twins facing in opposite directions.

Gemini rules the period of the year between May 21 and June 20. At this time of the year the Sun is approaching its peak in the sky.

Solar energy is high at this time, benefiting creative artists. This crystal can help one to channel their creativity and produce amazing art.

Individuals born under the sign of Gemini are often thought to have complex, multi-faceted personalities. The reality is that they can see multiple perspectives.

As the throat is physically the seat of verbal communication, the throat chakra serves as an energy center that communicates with all the other chakras.

The crystal helps one to open the throat chakra so that spiritual energy can be passed along the entire line of the body.

An open throat chakra also allows one to express their feelings and emotions with more freedom. This prevents one from becoming depressed and withdrawn.

Opening the throat chakra with Blue Lace Agate is best accomplished when one wears the stone near the throat. An amulet made from the stone is good for this purpose.

The Third Eye, or brow chakra, can also be opened with this stone. Holding it in the center of the forehead can help to encourage positive thoughts which open the brow chakra.

When the brow chakra is in balance there is a greater sense of mental control. One’s thoughts are more easily directed toward important goals.