Labradorite has a historical significance in many different cultures, but the oldest known example is its purpose for the Inuit peoples.

It was used frequently in shaman-related ceremonies, used for personally divine services and also moments of self-discovery.

It fell into recent usage after being seen in 1770 by Moravian missionaries in Canada who named it after the area they came across it in, Labrador, Canada.

It has a very powerful position as being on top of the mineral kingdom and is frequently used for shielding one’s general aura.

Many people use it in relation to psychic abilities and questions of the inner spirit. 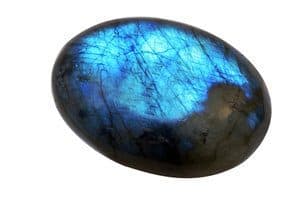 Labradorite holds meaning surrounding mysticism due to its inclusion in many ancient legends across many cultures.

It can be used as a beacon of light against many unfortunate circumstances that can be seen in the world because of its power meaning sustainability in those who hold it.

For many who use it for religious purposes, it can also mean incredible powers that (at their most potent) allow users to experience visions and heightened states of consciousness when coupled with intense and long-lasting forms of meditation.

Labradorite’s best property is its magical and difficult-to-understand power.

It is known what the crystal can be used to treat, but the name and associated elements of mysticism are not as easy to explain. Because of this, it brings with it the property of unpredictability.

Its healing usually brings out positive traits, though, providing help for those who are easily caught up in stressful situations without meaning to.

Labradorite has a number of physical benefits that can be utilized by users, such as helping with infections such as respiratory problems and digestive difficulties.

This level of healing also applies to other disorders around the body, specifically focusing on alleviating discomfort.

For those who deal with menstrual cycles, this is a useful stone to utilize in helping deal with pain.

For those who deal with a brain that is constantly feeling overwhelmed and trapped within the cycles that perpetuate in their life, Labradorite is a very useful stone to use when looking to calm your emotions.

By introducing feelings of content and calming within people, it leaves the user open to different possibilities, increasing the probability of taking risks and going on adventures on a daily basis.

Labradorite also allows users to keep in touch with their unconscious mind, helping people confront elements of their thought processes that they may not be aware of.

For example, if you are having trouble making a decision because none of the options feel right, utilizing Labradorite in your daily meditation can help unearth subconscious feeling that you weren’t aware of that can ultimately bring clarity to your dilemma.

One of the most rewarding parts of using Labradorite is because of the aforementioned subconscious benefits, as keeping in touch with your subconscious is another way to stay connected to your spirit.

Labradorite’s role as a protector allows you to explore your subconscious and overall emotional stability while also not opening it to outside dangers through vulnerability. This is to provide assurance, so you can ensure that you’ll keep your spirit protected while exploring and strengthening it.

Labradorite is one of the healing crystals that you should carry with you on a daily basis for it to be most effective.

You can do this easily by putting it in your pocket, attaching it to a bracelet, or making a necklace out of it for convenience.

No matter where the stone is, it’s important that you keep it close to your body for maximum effectiveness.

When using Labradorite in meditation can be an incredibly beneficial experience for those looking for emotional stability and confidence.

When using it, one will be able to notice pretty easily a feeling of balance, calming, and spirituality.

This can be achieved by closed eyes meditation and repeated affirmations about asking the stone for clarity.

However, once your body is able to calm down and access the stone, you can then make further changes to your overall demeanor through additional meditation.

Because of the stone’s inherent unpredictability, it is best to present the stone with all of the things you are considering and then stepping back, letting it work its magic.

With repeated daily usage, many find that Labradorite can provide additional stability to their life.

Labradorite is not a traditional birthstone but has an additional natural birthstone purpose with those who are born between the vernal equinox and spring (February 19th through March 19th) because of its ability to bring tolerance and restraint.

No Zodiac Sign aligns directly with Labradorite, but many believe it to be closest to Cancers (those born between June 21st and July 22nd).

Because of its belonging to the blue crystal family, Labradorite most stimulates the Throat Chakra, the Chakra used as the “vocal cords” of the body.

The Throat Chakra is beneficial because of its ability to connect with the other bodily Chakras and increase their productivity, something beneficial for those looking to stay in touch with many Chakras through the use of a single stone.