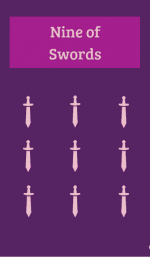 What is the meaning of the Nine of Swords card?

The Nine of Swords card is often a card about depression, anxiety and fear.

This does not necessarily mean that your fears come from some outside actions or people, but more of how you translate them.

When you are seeing this card in a reading you might think of worrying, despairing and feeling anguish, depression and sleepless nights.

The 9 of Swords represents the unhappiness and the gloomy day that can hit us from time to time. However, the Nine of Swords does not always indicates major pain and suffering.

Sometimes it is just a sign of some element that is causing unhappiness and a vulnerable spot in your life.

Nine of Swords in Upright Position

The appearance of the Nine of Swords in an upright position in your reading indicates that you are in a dark place right now, feeling fearful and anguished about a certain subject.

It is possible you are worrying too much unnecessarily and if you stop for a second and analyze the problem better, you might see it is not as bad as you thought.

We all feel anxious and fearful at certain moments in our life, but it is important to not let them take over you so you end up with sleepless nights and despair.

Remember that after the storm, the sun always comes up.

The Nine of Swords and Work

If you are going to spend your time worrying about your job you are not going to fix the problems.

Try to understand where the problem lies and if it’s a thing you can control, then go fix it.

If not, try not to stress too much about it.

Also, talking to other people might make you feel better, don’t hold it in.

Love and the Nine of Swords Card

The appearance of the Nine of Swords in your readings would suggest the something is wrong with your relationship.
Either you are guilty about something and you are dreading about being found out, or you are in an abusive relation and don’t know what to do.

Whatever it is, it is causing you significant anguish and emotional stress.

Nine of Swords might also be associated with a miscarriage and with the regret that comes with it. Health and the Nine of Swords

Because you find yourself in a stressful situation, you might find your peace in substance abuse.

Be careful! That is not what is going to solve your problems. You have to dig and find out what’s bugging you.

Only when you have found the solution to the problem you will find your serene and peaceful self.

Nine of Swords and Finances

The appearance of the Nine of Swords in upright position indicates that you are being overcome with worries and stress about your business.

Talk to some of the people involved and maybe they can offer you a better insight on things.

Don’t over spend trying to fill the holes left by stress and anguish.

When in your reading appears the Reversed Nine of Swords, the situation is not that different from when it was in Upright position.

The only distinction is that now you can see the light at the end of the tunnel.

You still feel anxious and fearful, but you realize now that the problem is not as bad as you initially thought.

This reversed card is telling you that there is help if you look for it, so just summon some willpower and courage to look and ask.

Combinations of the Nine of Swords Card