What is Andradite Garnet?

Andradite garnet is a branch of the family that includes the more familiar deep red garnet. It’s highly sought because of its beauty and rarity.

Melanite is the black, opaque type of this mineral. It can be polished to a high gloss or left in a more natural matte state.

Demantoid is a stunningly beautiful transparent green crystal. It varies from a very vivid, almost lime green to a more subdued olive color.

Topazolite varies from pale lemon to yellow-green or yellow-brown. It is brilliantly transparent. 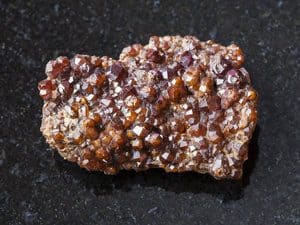 The Meaning of Andradite Garnet

This mineral gets its name from its discoverer. It was first described by the Brazilian mineralogist Jose Bonifacio de Andrada e Silva.

All three forms of this crystal are used by practitioners for healing and spirit work. They share the general powers of imparting strength, protection and strong relationship bonds in addition to the individual powers of each variety.

All three forms of andradite garnet stimulate the immune system and the blood. They also help you absorb minerals, such as iron and calcium, that your body needs for health.

Andradite garnet can also help keep you fit by improving your stamina and mobility. Demantoid may improve your vision, and melanite helps with structural issues like arthritis, rheumatism and weakening bones.

This mineral brings strength and balance. It helps boost your self-esteem and sharpen your focus so you can take on emotional challenges.

Andradite garnet also helps heal damaged relationships. It dispels many of the negative emotions that can tear two people apart, like jealousy, envy, anger and distrust.

If you aren’t currently in a relationship, this crystal can attract a partner with the qualities you want and need. It’s a good choice if you feel alone or isolated, and it can help you make connections.

Spiritually, andradite garnet cleanses. It allows you to ground negative energies and offers protection from harm.

If you’re feeling pressured or like you’re being put in a spiritually compromising state, andradite garnet can give you the confidence to stand up for yourself. Melanite is particularly effective for children that are fearful or upset.

Melanite should be in your toolkit if you work with others as a spiritual healer. It protects you from the negative energy they may leave behind and returns you to spiritual strength.

Andradite garnet is a great choice if you want to stimulate your creativity. The melanite form is particularly effective for men.

All three varieties of andradite garnet are rare and relatively soft stones. Because of these qualities, they’re not commonly available as decorative objects.

Melanite is sometimes used for jewelry, but it’s rare to find demantoid and topazolite crystals that are of high enough quality to use as gemstones. If you do find faceted cut stones, they will likely be breathtakingly brilliant and quite expensive.

You’re much more likely to find andradite garnet marketed to mineral collectors. Melanite, demantoid, and topazolite are all available in a more raw form for any practitioner that desires the power of these crystals.

If you practice Feng Shui, you can use demantoid to represent the energy of wood. It can be placed in the south or southeast rooms to facilitate vitality, prosperity and auspicious beginnings.

The Feng Shui system attributes water energy to melanite. Place it in the northern rooms of your home to bring calmness, balance, and regeneration.

The three color varieties of andradite garnet can all be used in meditation. Each color has different properties, so choose your tool based on the focus of that meditation.

Black melanite connects very strongly to the earth and its core. It promotes a universal oneness with all elements and beings of the natural world.

Use melanite when you seek the wisdom of the collective intelligence of the universe. It gives you the protection and safety you need to explore deep places without fear.

At the end of the meditation, let this black crystal help you ground the powerful, magical energies you have summoned. Emerge from your meditation feeling strong, enlightened and fearless.

Demantoid, the green form of this crystal, symbolizes growth and the life force of the universe. There’s no difference in the power of the various shades of green available in this crystal, so choose a stone that appeals to you.

Demantoid is a good choice when your meditation is focused on general renewal or the growth of specific new projects. It’s particularly useful when you seek wisdom and encouragement for long-term goals that will develop gradually over time.

The yellow topazolite crystal brings a bright energy to your meditations. When you need to make a decision or persuade someone, topazolite is your crystal.

This bright, sunny stone brings a general optimism and a sense of purpose. Using it in meditation can bring you to a higher state of energy with renewed vigor for life.

Andradite Garnet as a Birthstone

The yellow and green forms of andradite garnet are used as natural birthstones. As you might expect, the green demantoid symbolizes spring growth for people born from April 20 through May 20.

Topazolite’s color symbolizes the warm sun of early summer. You may feel a particular affinity with this stone if you were born between June 21 and July 21.

Andradite Garnet and the Zodiac

If you were born under the sign of Aquarius, from January 20 to February 18, you may find that andradite garnet speaks strongly to you. Aquarius is the sign of both water and air.

When used in chakra work, andradite garnet has the overall effect of magnetic balancing and aural expansion. Each color variety also has a specific affiliation for a particular chakra.

Melanite is attuned to the root chakra of the lower spine. This chakra controls movement and the release of Kundalini energy.

Demantoid is in tune with the heart chakra. It helps to stabilize your emotions and allows you to interact successfully in your relationships in the outside world.

Topazolite is affiliated with the solar plexus chakra. It has a strong balancing effect on your physical health and your strength of will.