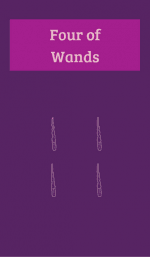 What is the Meaning of the Four of Wands Tarot Card?

Four wooden wands bound at their tops by foliage rise in front of an elegant castle and a golden sky to represent the Four of Wands.

This card carries with it joy and merriment. The structure that the wands create is called a chuppah and is generally associated with wedding ceremonies.

While the Four of Wands is a strong indication of marriage, it also represents other major life events that call for celebration. These events could be a new job, a big move, or a pregnancy.

Whichever you are celebrating, this card does have some terms and conditions. Reaching these life milestones are always the result of hard work and determination.

The Four of Wands tells us that we will achieve success by earning it, not by having it handed to us.

The Upright Four of Wands Meaning

In your tarot spread, it is important to pay attention to which position the Four of Wands holds.

If it should fall in your past position, it means that your time and energy have been well spent and that you are still reaping the benefits of the past.

This foundation is an attractive one, as it shows that your faith in yourself has payed off.

The lesson here is to continue to trust your intuition in your current situation and you will see things working out in your favor.

The Four of Wands is likely to appear in your current position if you have a big event coming up soon.

It brings with it a surprise, and this get together will end up being more memorable than you had anticipated.

If you do not have any events planned, this is a good indication that you will soon be invited to attend one that you may not have seen coming.

Marriage proposals and pregnancy announcements are likely to happen at this time.

In your future position, the Four of Wands shows a joyous and satisfying outcome to your current situation. It also indicates that this ending is coming sooner rather than later, and that it will last for a very long time.

You are finally coming to a place where you’ll feel secure. It also means that you can look forward to a life changing event that you never thought would be possible.

The Four of Wands in the future is all about your goals being reached, with some happy surprises along the way. Work and the Four of Wands

When it comes to your career, the Four of Wands says that your hard work is going to pay off and that you will be rewarded for your dedication and persistence.

The downside to this, however, is that once you’re at the top, you won’t have time for slacking.

There will always be someone who wants to take your place, and it’s important that you continue to put in as much effort as you always have if you do not want to be replaced.

Love and the Four of Wands

The Four of Wands is a desirable card to see in your relationship spreads. It’s a very good sign that a marriage proposal is in your future, or a vow renewal if you are already married.

If you’re unattached, be prepared to meet someone new. Since the Four of Wands is about celebrations, there’s a chance that you’ll find your soulmate at a big event.

Say yes to any invites you receive and attend with an open heart. The Four of Wands and Finances

When the Four of Wands appears in your financial forecast, it means that you are financially stable, or soon will find financial stability.

It is also a good indication that a raise is in your future.

However, these extra funds will be the result of your hard work and dedication, not chance or luck. Believe in your abilities and you will find yourself reaping the benefits.

Meaning of the Four of Wands in Health

In relation to your health, the Four of Wands is a symbol of vitality and fertility. If you’ve been thinking about expanding your family, this is the perfect time!

If babies haven’t been on your mind, it’s important to make sure you are taking the proper precautions when it comes to your health.

Follow through with any regimens and routines prescribed by your doctor, and commit yourself to improving your overall health.

The Four of Wands in Reversed Position

Unlike most tarot cards, the Four of Wands still holds its original meaning when it’s reversed.

The difference is that it’s results will not be as permanent or satisfying as they would have been had the card appeared in the upright position.

In this instance, enjoy the good things that are coming your way, but do not allow yourself to become too attached to these changes.

When the Four of Wands appears with the Three of Swords, it means that a recent disappointment or heartbreak is actually a blessing in disguise.

Keep your chin up and look forward to the positive things that would not have been possible without this change in your life.

The Lovers in tandem with the Four of Wands reiterates that your relationship is headed towards marriage, perhaps sooner than you had expected.