What is the Meaning of the Ten of Swords Tarot Card?

In traditional tarot, the Ten of Swords is represented by a man laying dead on a beach with ten silver swords stuck into his back.

It can be quite intimidating to see in your spread, and with good reason.

The Ten of Swords is a relatively negative card at face value.

It represents hitting rock bottom, hopelessness, and despair, but it also has a hopeful edge.

When you’re at the bottom, you can only go up.

While the Ten of Swords generally depicts a harsh lesson learned, it also presents the opportunity to start from a clean slate.

After you’ve lost something, it’s what you do to recover that defines you.

Will you allow yourself to lay dead on the shore, or will you stand back up and fight? 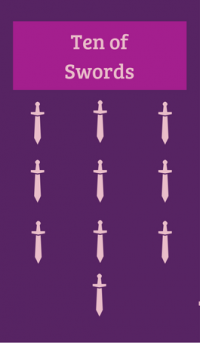 The Upright Ten of Swords Meaning

The position the Ten of Swords occupies in your spread is important in understanding its meaning.

This card also relies on the ones that surround it, so you’ll want to pay attention to how it relates to them as well.

Your past position is the best place for the Ten of Swords to appear.

This means that whatever turmoil and chaos you’ve been through in life is behind you.

It’s possible that you’re still holding onto some of the feelings from these past events, and they are still influencing your current situation.

It’s important for you to let go. You’ve already been through the worst, so why are you still carrying that burden around with you?

Finding a way to manage your thoughts and feelings about the past will help to brighten your future.

In your present position, the Ten of Swords is surprisingly hopeful.

This means that your current situation is about to come to a close, and that despite feeling like you’ve hit rock bottom there is hope.

You’ll soon be able to close this chapter of your life and move on to something even better, so don’t give up.

The Ten of Swords in your future position is not ideal. It is showing you that your current path is leading you towards some serious hardships.

The good news is that this card doesn’t lose it’s hopeful edge, so even though there may be some drama ahead, it will pass.

You’ll want to rely on the other cards in this spread to help prepare you for this future event. Work and the Ten of Swords

The Ten of Swords can be a good or bad sign depending on how you feel about your current job.

It signifies the end, whether it’s on your terms of your companies, so it’s time for you to start looking elsewhere. Instead of dwelling on the loss, focus on the next step.

If you are currently looking for work, this is a sign that you’re looking in the wrong places.

If your search has been massively disappointing, aim for something else.

Being passed up for a position you truly desired hurts, but it could mean doors opening in other places. Be on the lookout for other opportunities.

Love and the Ten of Swords

In relation to your love life, the Ten of Swords is not a great sign.

It often appears to those who have just experienced a bad break up, or who are wondering if their current relationship is worth salvaging.

It’s time to ask yourself if attempting to fix things with your partner is worth the effort. It may be best for both of you to just move on.

If you’re looking for love, this means that someone you’ve met recently who seems like a good fit isn’t all that they appear to be. Keep looking, but be critical. The Ten of Swords and Finances

The Ten of Swords in your financial spread acts as a red flag.

It’s time for you to buckle down and prepare for a set back. Do not take any risks with your money because there’s a good chance it will cost you tenfold.

The best thing for you to do at this time is to save every cent you can.

Depending on the other cards that appear in this spread, you could be looking at an unexpected expense that could leave destitute if you’re not prepared.

Meaning of the Ten of Swords in Health

When the Ten of Swords appears in your health oriented spread, it can be a bit unsettling. If you’ve been ill, it’s a good idea to get a second opinion.

If you’ve been worried about someone else’s health, now is the time to start making arrangements so that they’re getting the best care possible.

The Ten of Swords doesn’t mean loss, but things will definitely get worse before they get better.

Hang in there, and do whatever is necessary to take care of yourself and your loved ones.

The Ten of Swords in Reversed Position

The Ten of Swords reversed in your tarot spread is a good thing. This means that despite the turmoil in your life, you are beginning to rebuild.

Starting over is always hard and it’s easy to feel hopeless and lost, but this is a sign that you’re on the right path.

Find your strength and use it. You are capable of coming back from this.

The Tower paired with the Ten of Swords means that your proverbial fall from grace is cause by an outside influence, rather than your own doing.

While this isn’t an ideal pairing, it does place the burden of consequences on someone else, leaving you free to rebuild without much repercussions.

The Hermit, however, paired with the Ten of Swords means that your choices and actions were the direct influence for failing.

When this pairing appears in your spread, it’s telling you that you need to accept the consequences of your actions in order to move on.

It’s important that you own up to your shortcomings in order to grow.

When Temperance appears with the Ten of Swords, she is telling you that you’ve neglected to jump at a good opportunity.

While you can’t go back and change the past, you can promise yourself to take more chances in the future.