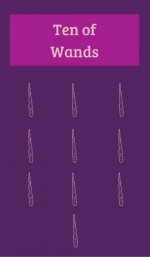 What is the Meaning of the Ten of Wands Tarot Card?

In traditional tarot, the Ten of Wands shows a man pushing his entire weight into a bundle of ten wooden rods, keeping them together and sacrificing his own stability in order to keep them from falling at his feet.

While there isn’t much else to this card, its symbolism is strong.

The Ten of Wands represents burdens, generally ones that first started as well intentioned ideas, projects, or plans.

It often appears to those who have piled their workload too high and now feel trapped under its weight, or perhaps have invested a lot of their time into a relationship that never had a change.

Regardless of your personal circumstances, you’ve reached a point where it all feels like it’s falling apart.

The good news is that these burdens you bear don’t have to be the end of everything.

The Ten of Wands is meant to open your eyes to your own choices in order to give you a chance to make corrections, rather than serve as a sentence or reveal impending doom.

This card isn’t without its edge, but it’s bark is much worse than its bite.

The Upright Ten of Wands Meaning

The meaning of the Ten of Wands doesn’t change as much as other cards do in different positions in your spread.

Instead it shows you where the mistake of taking on too many things at once was made in order for you to gain more insight into how you’ve wound up in your current situation.

In your past position, the Ten of Wands points to a time where you may have overextended yourself to what felt like the point of no return.

By taking on more than you were realistically capable of handling, it’s likely that other aspects of your life were unintentionally sacrificed.

While you can’t go back and change this now, you can start to repair some of the past damage that’s been done and find a way to move forward.

Those burdens are no longer yours to bear, so it’s time you let them go.

The Ten of Wands in your present position is most likely the reason you’re looking for answers within the tarot.

This means that you’re starting to feel the effects of biting off more than you could chew, and are most likely looking for answers in how to manage the stress you’ve placed upon yourself.

This doesn’t mean you cannot ask for help, in fact it is encouraged if you feel as though you’ve already exhausted all of your options.

In your future position, the Ten of Wands loses some of it’s edge. Here it acts as a warning that the outcome isn’t going to be so bright if you don’t fix the present.

Getting your priorities in order now means there will be less for you to worry about later.

This card is not fixed in the future, so it’s up to you to change courses and prevent yourself from becoming too overwhelmed.

Work and the Ten of Wands

The Ten of Wands is common in a career related spread for those who are feeling overwhelmed by their jobs.

It’s likely that you’ve taken on more projects than you can realistically handle simply because you didn’t want to be rude by saying no.

In this instance, the Ten of Wands is telling you to ask for help. It’s also important that you learn how to say no.

It’s great that you want to be helpful, but don’t do so at the cost of your own sanity.

If you are looking for work, this is acknowledgement that things haven’t been going your way. However, keep at it.

You can have the position you want, you just need to be patient.

Love and the Ten of Wands

A spread geared towards your love life containing the Ten of Wands indicates some trouble ahead.

If you’re attached, it means that issues with your partner need to be handled and not swept under the rug.

It’s likely that one or both of you do not feel that you have the support you need from the other, so it’s a good time to sit down and have an open and honest conversation about what’s bothering you.

If you’re looking for love, the Ten of Wands suggests that now isn’t the right time to jump into a new relationship.

It’s okay to be on your own, and you can use this time to do some of your own soul searching.

The Ten of Wands and Finances

When it comes to your finances, the Ten of Wands means that you need to start approaching your financial situation in a much calmer and logical way.

It’s likely that you’ve been feeling over-burdened by life expenses, so it’s time for you to come up with a plan and stick to it.

It’s a good time for you to get creative with ways to bring in more money, especially if you have any sort of artistic hobby.

Now is also a good time for you to ask for help, if you truly need it.

Meaning of the Ten of Wands in Health

The Ten of Wands appear as the answer to your health related questions means that you’ve allowed taking on too many responsibilities to bring on an unmanageable amount of stress to your life.

Stress is something that affects us both mentally and physically, so it’s no wonder you’re not feeling so hot.

In order to start feeling better, you’re going to have to find ways to lighten your burdens.

Make sure you’re getting ample sleep, and that you’re keeping up with your exercise and dieting habits. If you feel as though you need treatment, get it sooner rather than later.

The Ten of Wands in Reversed Position

When it appears in the reverse, the Ten of Wands is acknowledging that you’re tired of waiting for results and dealing with setbacks.

Instead of advising you to push through, it asks that you take a break.

You’ll be much better suited to tackle life once you’ve taken a timeout. Do not let important responsibilities fall to the side, but do understand that not everything is a top priority.

You’ll be able to refocus and get through things once you’ve cleared up your own mental fog and off put some of your burdens.

When paired with The Fool, the Ten of Wands means that what you are perceiving as a hardship isn’t as bad as it seems.

Your current situation doesn’t have as big of an influence on your life as you believe it does, and eventually it’s something you’ll be able to laugh about.

The Wheel of Fortune removes a lot of the negative connotations associated with the Ten of Wands.

This combination confirms that you have the foresight to know good thing are coming your way as a result of all that you’re taking on now.

Keep rolling with the punches and things will improve, but you already knew that.