Charoite may be less familiar to you because it was only discovered in 1947. It’s found in only one area of Siberian Russia, and it didn’t make its way to the rest of the world until about 1978.

This crystal became very popular very quickly because of its beautiful coloring and powerful spiritual effects. It has the power of transmutation on the physical, spiritual and emotional planes.

Charoite is a beautiful purple stone that ranges in color from lavender through violet to deep purple. It’s classified as a silicate. 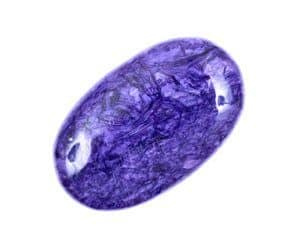 The coloring of this stone occurs in swirls of mixed purple hues. It may also have bits of white, black or orange that come from inclusions.

Charoite also has the property of chatoyance to a greater or lesser extent in different crystals. This is the cat’s eye look that you may be familiar with from tiger-eye stones.

You should take care in your handling of charoite, as it’s a relatively soft stone. Don’t leave it rattling around in a box with harder stones or it may be damaged.

There is some disagreement over the literal meaning of charoite. Some people think it’s named after the Chara River in Russia.

Other people point out that the Chara River isn’t really that close to where charoite is mined. They believe that its name comes from the meaning of the word “chary” in Russian, which is “magic” or “charms.”

Charoite has power to heal in the physical, emotional and spiritual realms. The most important word to remember is “transmutation.”

Transmutation of negative energy to positive energy, illness to health, and weakness to strength can come from using charoite. It grounds excess energy to produce an overall sense of calm and well being.

Charoite has a way of increasing general feelings of health by lessening aches and pains. It also produces faster healing of all bodily systems.

This crystal helps with disorders related to nervousness or anxiety. It creates a more restful sleep and combats sleepwalking, nightmares and insomnia.

Many people find that charoite also helps ease headaches, including migraines. It may also help with disorders of the eyes.

If you’re looking for a crystal to help with general detoxing, try working with charoite. It can produce positive effects when you’re leaving addictions behind and emerging into a new state of health.

Charoite has powerful abilities to bring about emotional healing. It enables you to focus on the now, and leave the past behind.

Clarity and courage are the hallmarks of this crystal’s effects. If you’ve suffered a deep loss, either personally or professionally, charoite can help you get back on your feet and move forward.

Charoite also strengthens your self-esteem and gives you the confidence to overcome fear. Deep fears of things that occurred in the past and fear of the future can both be overcome.

Some people find that using charoite brings them luck and greater success. They get a clearer fix on their goals and how to achieve them.

If you’re seeking help from your spirit guides, charoite can help you open your mind to their guidance. It also grounds your energy to keep you from becoming overwhelmed.

Perhaps one of the strongest effects of this crystal is its ability to encourage service to others. It encourages feelings of oneness and creates a spirit of generosity within you.

You may also find that charoite boosts your creativity. It draws positive energy and clears your mind, allowing creative thoughts to come to the fore.

Because of the way it occurs in nature, charoite can be used for many practical objects. It’s considered a fibrous stone and is typically found in large pieces.

You can find charoite made into bookends, vases and a variety of other decorative objects. When used this way, it’s sometimes called charoite jade.

Charoite crystals are also made into stunning jewelry. Cabochons are popular because of the way they show off the natural beauty of the stone.

As magical talismans, charoite crystals bring safety to travelers and peaceful sleep to all. They can be worn to ease loneliness and increase confidence.

Practitioners of Feng Shui use charoite to represent the energy of fire. Place it in the southern areas of your home to bring brightness and passion.

Using charoite in meditation brings a general increase in your level of vibration. It increases your power no matter what you’re focusing on during the session.

Charoite is known for opening your spirit to past life memories. Through its ability to increase you willingness to serve humanity, it can help you identify and redress past life wrongs.

Even if all you’re looking for during a particular meditative session is to calm your frazzled nerves, try charoite. It grounds your energy, cleanses your consciousness and brings relaxation.

Charoite as a Birthstone

Since charoite is a relatively new member of the crystal family, it’s not one of the traditional birthstones associated with particular months. It is, however, considered a natural birthstone.

The stunning purple hues of charoite make it ideal for people who were born from December 21 through January 19. Although people in this group may have the strongest connection to the stone, anyone who is looking for magical dreams and spiritual healing should work with charoite.

Charoite and the Zodiac

There are differing opinions on whether charoite has an affinity with any particular astrological sign. Some people don’t believe so, while others associate it with Scorpio.

If you are a Scorpio or are a practitioner working with a Scorpio, you might want to experiment with charoite. Judge its effects in this context for yourself and proceed accordingly.

Charoite is used when working with the heart and crown chakras. The heart chakra is located approximately at the sternum while the crown chakra is at the topmost point of the head.

Charoite stimulates the heart chakra to help you balance your internal and external environments. It enhances your relationships with others and helps you attract positive and repel negative energies.

The crown chakra allows you to communicate with the larger universe. Charoite balances this chakra, giving you clarity and a sense of destiny.