Are you interested in the deer spirit animal? Then the guide below is for you!

When the deer spirit animal comes into your life, it means that you are a loving, compassionate, and gentle person.

The deer spirit animal will go a long way in helping you unravel the challenges that you may encounter in life.

The deer is an animal that we closely associate with gentility. It teaches you to be kind and peaceable. You are truly blessed when you welcome this spirit animal into your life. This is because you’ll know true peace happiness.

In addition, you won’t struggle to express unconditional love.

The deer totem comes into your life with new opportunities. Your life will be full of exciting adventure. New doors will open to you.

In short, you will be able to lead a more rewarding lifestyle.

What is the Meaning of the Deer Spirit Animal?

When the deer enters your life, it means that you need to be gentle on yourself. Do not push yourself too hard.

Cancel all voices of self-criticism with the voice of understanding and gentleness.

The deer spirit animal means that you need to be consistent with the path you have chosen for yourself.

But, also open your eyes to the treasures that you’ll find along your path in life. Better still; be responsive to your inner treasures.

Once you tap into them, they will bring all the goodness that Mother Nature had bequeathed you.

This animal spirit in your life enables you to be well received by others. They will appreciate your generosity and graciousness.

Actually, you have the power to influence positive change in others. Remember to nudge them gently. You don’t have to push them hard.

With the right effort, you’ll get them to move in the direction you desire.

The other meaning of the deer is serenity. With this spirit animal in your life, you’ll be able to hear unsaid words and to see in the shadows.

This spirit allows you to maintain innocence, and to exude gentility. 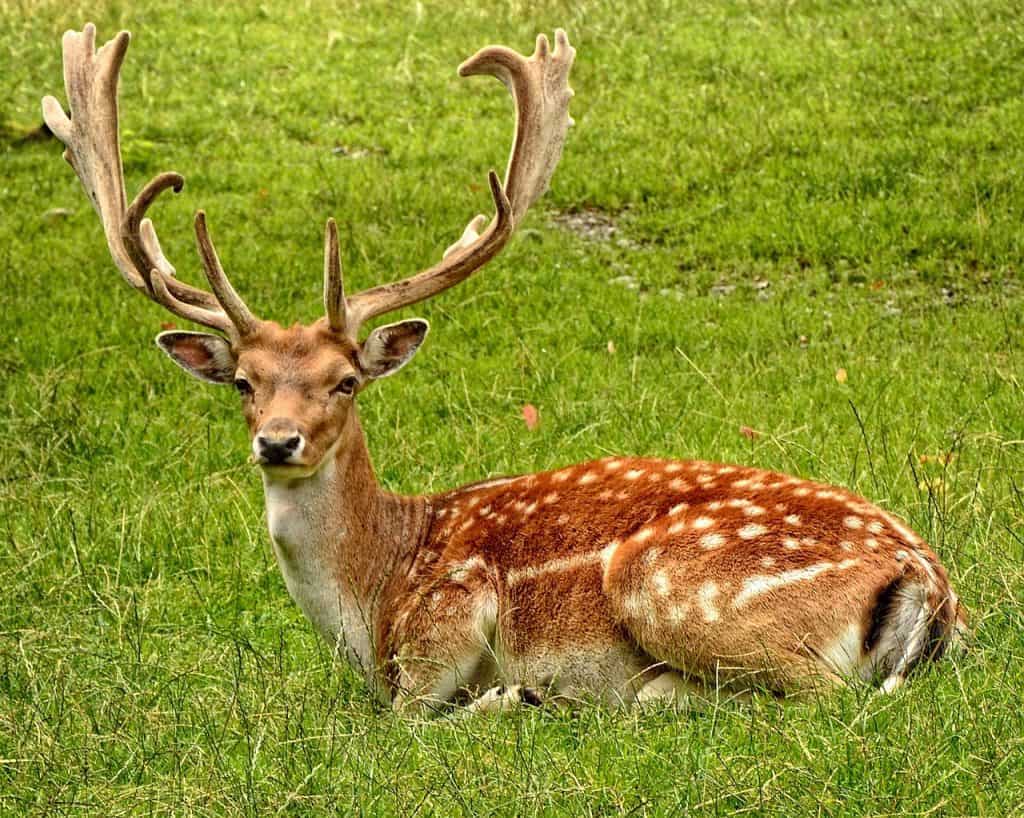 What is the Symbolism of the Deer Spirit Animal?

Many cosmogonies, legends, and myths underscore the symbolic value of the deer spirit animal.

In all these narratives, the deer stands for virtue.

The deer’s antlers grow beyond its body. Peoples of many cultures see this as a symbol of spiritual authority.

The fact that the antlers grow towards the sky has a sacred connotation.

The antlers fall off and grow against several times in the deer’s lifetime. This is a symbol of freshness and regeneration.

The Deer in Christianity

In Christianity, the deer stands for piety. It signifies the devotion of Christians to God. In addition, it shows a way of good taking care of his children.

For example, take the case of Saint Eustace. Placido was a Roman General before he became a saint.

He was out hunting when he came across a huge deer. From the deer’s eyes, Eustace perceived the light of Christ. Also, the voice of God spoke to the general through these eyes.

Placido went ahead to become a Christian because of this encounter. After his death, he was elevated to sainthood as Saint Eustace. The Deer in Celtic Tradition

In the Celtic tradition, the symbolism of deer is seen in two perspectives.

The first is the masculine element, known as Damh in Gaelic. According to legend, this deer is sacred. It stood for pride, purification, and independence.

This stag was respected as the king of the forest. It would protect all the other creatures in the forest.

On the other hand, there’s Eilid, the feminine deer. Legend has it that this deer would turn into a woman to avoid being hunted. This red deer stood for grace, gentleness, and femininity.

The Deer in Native American Tradition

Some tribes entrusted their hunt to the deer. They believed that the deer would give them productivity.

The Cherokee tribe has it that the deer got its antlers after defeating the rabbit in a race contest.

The rabbit is depicted as being dishonest during the contest, unlike the pure and honest deer.

According to the Wixaritarie people of Mexico, the deer communicate the messages of God to men. They also believe that deer is the first interlocutor between the gods and shamans.

Many Native American tribes associated the deer to plants. It heart represented the peyote and its antlers corn.

The Deer in Buddhism

According to the teachings of Buddha, the deer stands for longevity, peace, happiness, and harmony. The male and female deer are represented together at the Dharma wheel.

The Buddha was a deer in one of his former lives. he often spoke to men in this form.

Buddhism shows the deer as a timid, serene animal. It stands for purity.

According to a Tibetan legend, the deer does help men solve challenges in life.

Importance of the Deer Totem

Just like the dog and the cat, deer totem people exude a lot of gentlenesses. You are able to touch the hearts of people.

You are good at giving others comfort when they feel wearied.

If you have the deer totem, you are able to spread freshness and innocence wherever you go. Also, you are highly attracted to adventure and new experiences.

People with deer totem can do very well in music and poetry.

You have a nobility of purpose and a pure heart that allows you to see beyond the obvious. As such, you have the capacity to form long-lasting relationships.

When to Call on the Deer Spirit Animal

You will benefit immensely if you summon the deer spirit animal when you are in the following situations:

Does the Deer Appear in Your Dreams?

When a deer appears in your dreams, it means natural beauty, meekness, gentleness, compassion, and grace.

The deer is rich in feminine qualities that will add much value to your life.

A dream involving a deer could also point out to virility, alertness, and independence. It could mean that somebody dear to you is just about to enter your life.

The dream could also stand for naivety and vulnerability. Take care that people do not take advantage of your innocence and gentleness.

If you dream of a black deer, you need to acknowledge your feminine qualities. Embrace them and let them work for you.

Dreaming about hunting and killing the deer means that you are trying to suppress your feminine side.

If the dream involves a buck, it means that you are assertive, masculine, and very virile. If your dream has two fighting bucks, watch out for misplaced aggression.

It could mean that someone is trying to take control and dominate a certain aspect of your life. Having a deer totem in your life has many advantages. For example, it allows you to exude sensitivity in several aspects of your life.

The deer spirit animal brings serenity and peace into your life. You will be able to hear what is not being said. You will feel what has not been demonstrated.

The deer animal spirit will encourage you to show innocence and gentleness. You will be more responsive to the plight of others.