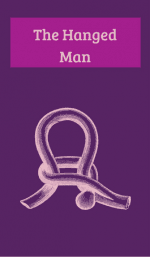 At first glance The Hanged Man may seem like a bad sign, but what’s interesting about him is his comfort with the situation he’s in.

In traditional tarot, The Hanged Man is seen hanging upside down with his hands behind his back and a halo around his head, much like how saints were depicted in art from the middle ages.

His expression is not one of sadness or anger, but of contentment.

His hands behind his back are symbolic of his ability to manipulate the situation he’s in.

After all, The Hanged Man has accepted that he’s brought it upon himself to be stringed up in a tree.

When this card shows up in your reading, it’s important to know if he is signifying you or someone else in your life.

When The Hanged Man appears in your spread, you’ll want to first determine if he is meant to be you or someone else in your life.

It’s important that you ask yourself honestly what role you’ve been playing in the situation your spread is for.

When he represents someone else in this position The Hanged Man is acting as a warning.

It’s best to watch out for toxic behavior and decide honestly if this person is worth the damage they can cause.

Work and The Hanged Man

Have you been feeling indecisive with your career path? The Hanged Man in relation to work is urging you to step back and view the situation objectively.

If you’re planning on leaving your current job, he is advising you to find a new one before putting in your two weeks.

Love and The Hanged Man

When The Hanged Man appears in a relationship oriented spread he is telling you to take a step back and reexamine your current situation.

It’s possible you are moving too quickly, or not moving quickly enough. The other cards in the spread will help to determine which it is.

The Hanged Man showing up in this sort of spread for someone in a new relationship could be a red flag that they are about to bite off more than they can chew.

It’s up to you to decide if the web your relationship may weave is something you’re ready to handle.

The Hanged Man and Finances

If you’ve been considering making a big purchase, The Hanged Man is a sign that you need to consider all of your options and go with your gut feeling.

If a deal seems like it has many loopholes or could ultimately backfire and leave you penniless, now is certainly not the time to make it. Cover all your bases and trust your instincts.

Meaning of The Hanged Man in Health

In a tarot spread related to your health, The Hanged Man speaks to your physical health.

He is a reminder that you should be checking in with your health and finding a good balance in both your diet and exercise routine.

Now is also the best time for you to break bad habits, such as smoking or drinking.

For a more serious health concern, this card is a sign that you should get a second opinion.

The Hanged Man in Reversed Position

The Hanged Man in the reverse means that you’re not taking time to consider your options before rushing to action.

This kind of impulsive behavior will not turn out favorably for you and he is advising you to slow down before bringing more chaos into your life.

In a spread with a lot of Cups cards, The Hanged Man is representing your love life.

Now is not the time for you to actively pursue romance as this is spelling trouble.

When paired with The Emperor or The Empress this is a sign that a bossy person in your life will be best dealt with without aggression. Being diplomatic is your best course of action.

Kill them with kindness.