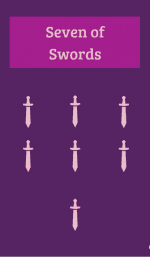 What is the Meaning of the Seven of Swords Tarot Card?

A man stands before a golden sky watching over his shoulder while he carries off five silver swords.

Two swords remain behind him stuck into the ground, though it’s widely accepted that he’ll be coming back for them as well.

It’s apparent that he is stealing these swords, as he watches his back while making his getaway.

The Seven of Swords is one of the more straightforward cards in terms of its imagery. This card symbolizes deception and trickery.

It’s heavily reliant on the reason for your reading in order to understand where the deception is coming from.

Sometimes it stands for a person in your life that is lying to you, while other times it means that you are the one ditching honesty.

When you see it in your spread, you’ll have to be honest with yourself about your intentions so that you have a better understanding of who it is meant to represent.

The Upright Seven of Swords Meaning

The Seven of Swords is one of the more revealing cards of the Minor Arcana. It’s important that you are prepared to hear things that might hurt.

In your past position, the Seven of Swords has several meanings, but generally it points to a time where you or someone else was deceptive.

It’s possible that a partner has been unfaithful in the past and this is the first time you’re hearing about it.

Keep in mind that the past is still the past. How you choose to proceed with this newfound information will change the course of your current path.

The Seven of Swords in your present position means that there is currently deception in your life.

Someone is getting away with lying to you and they aren’t going to stop until you call them on it.

On the other hand, if you are the one being deceptive, it’s actually working out in your favor, though you’ll want to be mindful of the people you may be hurting.

While telling little white lies once in a while isn’t a bad thing, telling enough of them may upset your close friends and family if they were to find out in the future.

The future position revealing the Seven of Swords is solely about you.It says that in order to get ahead you’ll have to rely on your wit and improvisation skills to skirt around any hurdles that pop up in your life.

The good news is that you’ll get away with it.

The bad news is that this has the potential to completely blow up in your face, so make sure you’re considering the consequences of your actions before following through.

Work and the Seven of Swords

When it comes to your career, the Seven of Swords means that right now your work is being closely watched by your superiors.

It’s important that you maintain a good work ethic and double check that your end results are mistake free before claiming a project is done. Do not get caught up in work politics at this time.

Love and the Seven of Swords

The Seven of Swords in your relationship spread indicates a huge lack of trust. If you’re already committed, this card is suggesting that you have suspicions about your partner.and question their integrity.

It’s important that you talk to them about it, even if it’s painful.

Snooping through their texts is only going to cause more problems whether you find validation for your feelings or not, so avoid that sort of tactic and talk to them instead.

If you’re actively searching for love, the Seven of Swords serves as a reminder that other people cannot read your mind.

If you’ve been meeting interesting people, but nothing long term has come from it, it’s possible you are being perceived as not being interested.

Change up your tactics and show people that you are open for love.

The Seven of Swords and Finances

While seven is considered a lucky number when it comes to money, the Seven of Swords is a disaster.

Taking risks with your income will end up costing you more than you’re willing to let go of, so hold off on gambling, loaning, or investing.

If a monthly expense isn’t a necessity, cut it from your budget and put the extra cash into savings. Being frugal at this time is your best course of action.

Meaning of the Seven of Swords in Health

In your health oriented spread, the Seven of Swords is telling you to get rid of clutter in order to improve your health.

This could mean physical or mental clutter, so you’ll need to be honest with yourself about which one it means for you.

This card is likely to come up when someone is displaying signs of hoarding. You’ll want to nip this in the bud sooner rather than later.

If it’s mental clutter to which this card refers, you’ll want to find ways to quiet your mind so that stress doesn’t start to cause physical ailment.

The Seven of Swords in Reversed Position

When the Seven of Swords appears in your spread in the reverse, it means that you are ignoring good advice.

Your situation isn’t as hopeless as you think it is, and you are pushing away people who can genuinely help you.

You can have all the things you want, you just have to recognize when you’re sabotaging yourself and correct it.

The Seven of Swords paired with The Devil symbolizes breaking a cycle. This could mean letting go of a relationship that is unhealthy, or ditching a bad habit like smoking or drinking.

When Judgement appears with the Seven of Swords, it means that whoever is using trickery will get what is coming to them.

This is a very karmic combination, so if you’re the one that’s telling lies it is more beneficial for you to come clean.