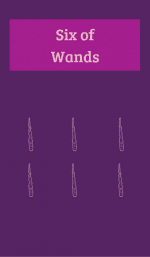 What is the Meaning of the Six of Wands Tarot Card?

In traditional tarot, the Six of Wands is represented by a knight on a white steed riding through a large crowd of people.

In his hand he holds a wooden staff high above his head, while the crowd behind him hold up five identical staffs in celebration.

The Six of Wands is a sign of victory and celebration. Despite what you may be going through now, it is a very attractive outcome for you.

The knight is not only taking his victory lap, but those around him are also celebrating his success.

For you, this means that your loved ones have your best interest at heart and are more than happy to celebrate your success with you.

The Upright Six of Wands Meaning

Unlike most tarot cards, the position in which the Six of Wands appears does not change its meaning.

Instead it helps you to figure out where in your life this victory takes place.

It will be important to look at the other cards in your spread to determine how it has affected or will affect your path.

In your past position, the Six of Wands is a strong indication that a part of you now is trying to return to the former glory of the past.

This position is common for those experiencing a midlife crisis, or those who feel that their life is lackluster compared to their youth.

Your current situation can be improved by recognizing that the past is the past. Wallowing in it is not going to help improve your future.

The Six of Wands in your present position means that will be triumphant in your current situation.

Whatever your reasons were for the reading, this is good news that the thing affecting your life will turn out in your favor.

The future is the best possible place for the Six of Wands to fall.

This means that you can expect your current situation to end in your favor.

If you’ve been working on an extended project, or pursuing a romantic interest, this is a sign that your goals will be achieved.

Work and the Six of Wands

If you are currently looking for work, the Six of Wands is a sign that you will soon find a position that is the right fit.

It’s possible that you are more qualified than you believe you are, so stop selling yourself short and aim higher.

You are capable of more, and you deserve it!

For those currently employed, the Six of Wands indicates a promotion or pay raise in your future.

Your hard work has not gone unnoticed and you can expect it to pay off in a big way sooner rather than later.

Love and the Six of Wands

In a love oriented spread, the Six of Wands is a sign of union and happiness. If you’re already attached, it means that you’ll be able to enjoy a newfound closeness in your bond.

If you have been experience any issues with your partner, now is the time to voice your concerns and work through things together.

Being open and honest with how you’re feeling is the key to a stronger bond.

If you are looking for love, this is a fantastic sign that the person of your dreams is not a lot closer than you think.

Love is definitely in the cards for you, so make sure to keep your eyes open.

The Six of Wands and Finances

The Six of Wands is an incredibly desirable card to see in your financial future. It means that you can expect an increase in your cash flow.

This could mean a raise, an inheritance, or an investment with a great return.

Regardless of the specifics, this is an indication that good luck and good fortune are coming your way. If you’ve been considering purchasing a new home or starting your own business, now is the best time for you to do so.

Meaning of the Six of Wands in Health

The Six of Wands in relation to your health is a good sign. Chances are you are more concerned about your health than you realistically should be.

This card speaks more to our emotional health than our physical health, so if you’ve been stressed out, take time to decompress. Everything is going to be fine, you just have to keep a positive attitude.

The Six of Wands in Reversed Position

When the Six of Wands appears in the reverse, it means that you are not doing everything you can to make your goals a reality.

You are holding yourself back from having everything you want, and it’s time that you push yourself to do better.

This card still says that you will have a positive outcome, even though it is reversed, but that you need to up your efforts in order to reap the benefits.

Something is lacking, and it’s important that you figure out what before the opportunities you’re awaiting pass you by.

If The Sun or The World pair with the Six of Wands in your reading, then congratulations are in order!

This combination of cards means with absolute certainty that you will achieve your goals and that the effects of these life changes will last for a very long time.

The Six of Wands makes an attractive pairing with cards of the Pentacle suit, as it means that you will find a streak of good luck where your finances are concerned.

It’s a good time to take risks, as gambles at this time have the ability to pay off in a life changing way.